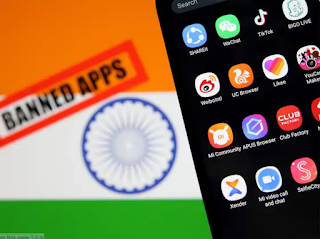 The Indian government has once again launched a digital surgical strike and banned 54 Chinese apps. The official list of banned apps has not been released yet, but it is said that the government has banned 54 Chinese apps in India.
The apps have been banned by the Ministry of Electronics and IT. All these apps were sending data of Indian users to China and other countries. It is said that these apps were transferring data of Indian users to foreign servers. Google’s Play Store has been ordered to ban apps.
The list of banned 54 apps includes apps from major Chinese companies such as Tencent, Alibaba and gaming firm NetEase. It is being said that these 54 apps are the new incarnation of the banned apps in 2020.

The 54 Chinese apps that have been banned include

Garena Battle Royale game has been removed from Google Play Store and Apple App Store. In such a situation, news is also coming out that apart from 54 Chinese apps, free fire has also been banned in India. However, Free Fire Max is still available on the Google Play Store. No official statement has been issued by Garena at this time. Let me tell you that Singapore based gaming company Garena develops this Battle Royale game.